A lot of the music I post here is easily digestible. Being a young child in the new wave era gave me a keen pop awareness, and pop, despite its unrelenting wink-this-wink charm, is relatively disposable. So it's telling that I've been listening to the haunting new O. Children single "Ruins" a lot the past few weeks without really saying anything. I was kind of indifferent towards it in the beginning, but still mesmerizingly drawn to its presence. Officially released last night in London, the darkwave organ tone and deep vocal is more fitting for a fall release, but hell, here it is, orbiting a black cloud sonically larger than any spit from Iceland. I'm sure I won't be sick of it by October. 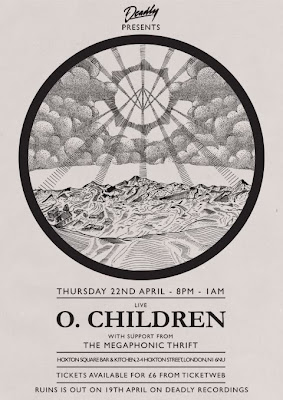 But beyond just another extension of the darkwave element creeping into rock music again, O. Children seem to enrapture more than anything else. This magnetic pull is intense, and the music doesn't go down so easily. Tobias' vocals could be the biggest hangup to prevent them from playing stateside arenas, but it could also be the band's greatest asset. Haunting doesn't begin to describe it, and it makes the Horrors look like safety patrol kids in elementary schools.

Jokers of the Scene has already electro-clubbed it up, according to Fader, and this could be the next step in the Muse Paradigm. This is some weighty shit, which is always near impossible to pull off with gothic tinged sounds. But this is clearly the next step. Of what, I'm not sure. Give me another few weeks to figure it out.

Posted by Michael Marotta at 12:22 PM