Hotline action for a busy Tuesday: ...Dragonette must love us here in Boston. 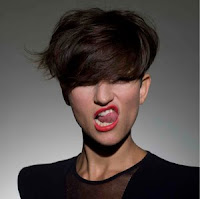 After the Canadian electro-rock band’s massive North American tour with UK pop princess Little Boots got canceled last month (it was supposed to hit the Middle East tomorrow along with Fan Death), we here in the Hub figured that was the end of that. But Dragonette threw together some quick club dates sprinkled across the states, and they hit Great Scott in Allston tonight.

I’ve said it before and I’ll say it again: Dragonette front woman Martina Sorbara is this generation’s Justine Frischmann. Her seductive, commanding stage presence only enhances Dragonette’s synthed-out glitter-rock. Last fall the band blew up Allston in a sea of sharp synthesizers and an epilepsy-inducing light show.

But like Poison once told us, you can look, but you can’t touch, as Sorbara’s husband will be right there on stage with her, playing bass. But dancing is allowed, and for those not headed to Cambridge to kiss-off the Hearthrob party, this should be an alternative just as sweaty and electro’d out.

Choosing a Dragonette song is like picking among kin (“Pick Up The Phone” and “I Get Around” are Hotline favorites), but we’ll post the band’s underrated and slightly under-the-radar collab with Martin Solveig.

Posted by Michael Marotta at 11:43 AM