It's baaaack. Advance tickets on sale Saturday via greatscottboston.com: 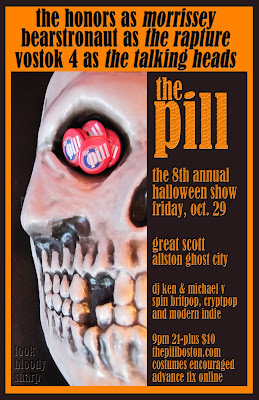 2009: The Daily Pravda as Radiohead, Televandals as the Clash, The Honors as The Smiths and Lindsey Starr & The Chemical Smiles as the Sounds

2008: The Perennials as the Strokes, Wonderful Spells as the Kinks, the Sun Lee Sunbeam as Elastica

2007: The Daily Pravda as David Bowie, Mako as the Stone Roses, the Lie Society as Blur and the Perennials as the Libertines

2006: Lifestyle as New Order, the Daily Pravda as Suede, the 8mm Fuzz as Echo & the Bunnymen

2005: Emergency Music as the Velvet Underground, Protokoll as Bauhaus, the Chainletter as Joy Division

2004: The Information as Depeche Mode, the Bon Savants as Pulp, Emergency Music as Blur, the Cignal as Primal Scream

2003: The Information as the Cure, the Cignal as the Happy Mondays
Posted by Michael Marotta at 9:28 AM 18 comments: