To mark the 15th anniversary of Jarvis Cocker storming the '96 Brit Awards stage to protest the God complex displayed by a performing Michael Jackson, we at the pill have decided to have our second battle on Feb. 18: Pulp vs Jacko.

It follows last year's heralded Blur Vs Oasis dance floor throwdown, which commemorated the 15th anniversary of the dual release of singles "Country House" and "Roll With It," respectfully. Oasis won that battle, for the record.

Expect a shitfuckton of Pulp, and a fair shake of early Michael Jackson to counter the Britpop razzmatazz. Honestly, this should be an interesting night, and while the pill has never played a Jacko tune before (except on Halloween where we sometimes bust out Thriller), we're willing to open up the playlist in the name of the battle. Here's the flyer, and actual video of the incident follows after the poster jump. 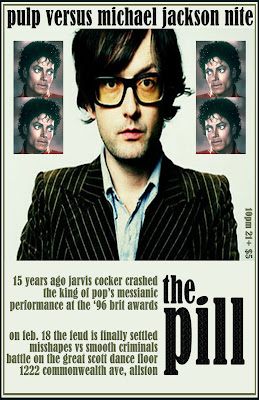 Posted by Michael Marotta at 2:57 PM No comments: