At a very early age the bro-flick "Swingers" taught me to always Double Down on 11. If I only had my 11-year-old heart and digestive system when engulfing the new KFC Double Down sandwich. 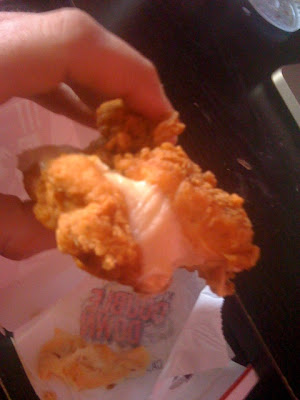 A day after its debut, I broke down and got it. I hadn't been this excited to eat anything since 10th grade after school at my girlfriend's house in West Babylon. And as quickly as that episode ended, it now sits deep inside my ever-expanding belly, sending sharp dagger-like pains through my chest and filling my swamp cavern mouth with soggy sodium-castle stalactites slowly dripping down on my tongue like poison cones of doom. My teeth might melt from the salt burn, and I swear the colonel on the packaging is mocking me. He might have just called me a fag.

But hey... this was TASTY AS FUCK. It's a bit messy, and with no napkins provided I figure KFC simply expects us to eat our own sticky gooey fingers after devouring this Goliath of Gut Girth. It tasted as advertised, like a huge piece of chicken (two, for the record) with bacon, cheese and sauce, and strangely enough, I felt bad that I was doing all this without the bun. It's almost like cheating on bread. I'm not sure I want to exclude bread from cheap dining situations like this. We have Taco Bell for this type of gratuitous food-porn exploration.

Overall, it was an experience, I'm glad I did it, but I can never for the life of me anticipate having this thing ever again, regardless of the size and herbal quality of the gorilla finger I smoke the fuck out of. Who's the big winner tonight? Mikey, Mikey's the big winner, that's who. I think.

Like Trent says in Swingers, always Double Down on 11. Fifteen years later, he might be citing the total extra poundage I just wrapped around my pear-shaped frump-figure after devouring this beast like a teenager in heat. FML.
Posted by Michael Marotta at 4:02 PM