The weekend, for me at least, starts on a somber note, as I just learned that Pela, a Brooklyn based indie band that will be forever etched among my all-time favorites, has called it a day. 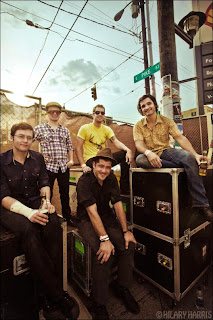 I booked Pela a few times at the pill, and despite always pulling off a fercious live show, it's the songs and songwriting that made Pela so amazing. My friend Jenny Applebaum tipped me off to their early demo years ago, and the first time I ever listened to them I was driving to my girlfriend's house in Somerville from the Lansdowne Street club I was managing, around 3am, when "Lost to the Lonesome" came on. Somehow, as I drove I listened to the lyrics and for the first time in my life, envisioned a conversation with the ghost of my biological mother, a person I have never met nor ever think about. The lyrics became our conversation. While the song is about leaving a town behind a hitting the road, learning the songwriter, Billy McCarthy, was also adopted struck a nerve. These songs, they just resonated. Few things have ever pulled these types of emotions from the depths in which they're buried. But that's what Pela songs did to me.

Musically, I could never explain why Pela songs struck so hard -- they were sometimes simple but never kitschy, always sincere and never trendy. No synthesizers or gadgets. Just four dudes playing the straight up modern indie rock n roll. (A better critic could better describe their sound, draw parallels to influences and contemporaries.) But by god, the music was incredible. "Waiting On The Stairs." "Tenement Teeth." "Trouble With River Cities." "Rooftops." I could go on... This is quite the ramble I got going on here, and my trite words could never do them justice, but this was such a force of a band, such amazing people with fame seemingly inescapable.

But hey, life isn't always fair. In the years I've known Pela personally and professionally, they gave me some of my favorite music ever. And I'm certainly grateful. What a band. What a motherfucking band. Here are some videos, and their "goodbye note" posted down below.


Thank you... and Goodnight
It is with great sadness that we write you today. Pela's collective journey has come to an end.

Over the past 2 years we've faced tremendous obstacles. We recorded an album twice, had a falling out/legal battle with our old label, fired 2 managers, had a big record deal fall through, and Billy had a hand injury followed by a foot injury.

We've worked tirelessly to get our music out of ourselves and into your ears. We worked endlessly to make the music and our live show the best we could. At the end of the day we had to start dealing with some realizations.

Your lovely faces are etched into our memories. Looking at the Crowd Project videos says it all.

Please keep in touch, we'll promise to do the same.