From my Cheap Thrills column in the Herald, which ironically features my ex in the fall fashion spread. Seriously, FML. But on tap this weekend: Willy Wonkaz, sales at Harvard and the re-launch of TRUE productions... 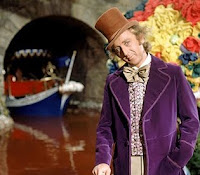 ‘‘Willy Wonka & the Chocolate Factory” Smell-O-Vision screening Union Square at Webster and Somerville avenues, Somerville. Friday at 6 p.m., all-ages. FREE
OK, let’s admit it right off the top: The 2005 “Willy Wonka” remake starring Johnny Depp stunk as bad as Augustus Gloop’s armpits. But the 1971 original is still as strawberry-candy-scented as ever, and the Somerville Arts Council is out to prove it with a Friday night Smell-O-Vision screening that would even make Veruca Salt smile. Bring your nose for cinema as Gene Wilder and the gang come alive in an awesome display of olfaction, where the scents match the sights on the screen. Arrive early for some Wonka-inspired scent experimentations. Local businesses located a butter-scotch hop away are joining in on the fun. It’ll be as if the remake never happened. And that tastes just yummy.
Info: somervilleartscouncil.org

There’s been a void in Allston’s weekend electro dance scene ever since Saturday party Circus at Privus Lounge disappeared a few weeks ago. But now one of Circus’ curators, Jeff Gil, is back on the scene with a new party on a new night at a new venue, resurrecting his old production company True. This time Gil drops the beat bomb next door to Privus, at the Kells, enlisting a host of DJs, headlined by New England rave veteran DJ Venom. Since it’s True Production’s first party in more than two years, they’re bringing out the big guns on the dance floor, offering up sets from Basstown’s Die Young, Parallax of Tight Crew, Trust’s Rogue Waves, Mr. Matt of Hot Pink Delorean, Lenore of Elements and, of course, Gil himself, known in the clubs as Gil-T. It’s like an all-star collection of Boston-area DJs. And since the next day is Labor Day, it’ll feel like a Saturday night all over again.
Info: truecrew.com

SCORE SOME STUFF
Harvard University Habitat for Humanity Sale
Harvard Science Center, One Oxford St., Cambridge. Saturday and Sunday, 9 a.m. to 5 p.m., free admission
For years locals have cruised the sidewalks of Allston, Somerville and Cambridge around Sept. 1, scoring all sorts of housewares, gadgets and furniture left behind by carefree college students. But most of the stuff left outside was junk. If a college student didn’t want it, why should you? But three cheers to Harvard’s Habitat for Humanity Sale, which rounds up about $80,000 worth of stuff each spring when the exodus occurs - from mattresses to shelving units to whatever else Harvard students use while getting wicked smart. They clean it up over the summer (hello, sanitation nation!), and greet the influx of students with one giant sale that raises money for student service trips and a renovation house in Dorchester. All non-students are welcome, too, and this weekend is the sale’s last hurrah. Regardless of what’s left, it sure beats the junk left out overnight on Linden Street in Allston. Ew city.
Info: sites.google.com/site/hhhstuffsale, or e-mail HHHStuffSale@gmail.com
Posted by Michael Marotta at 8:16 AM