Pulled from today's Hotline: “Speed seduction in a magazine / Endless pleasure in a limousine / In the back shakes a tambourine / Nicotine from a silver screen.” 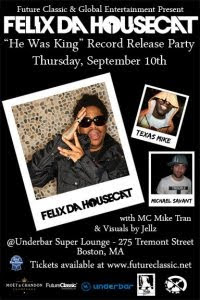 While Felix Da Housecat has built a fairly impressive reputation as a house DJ in Chicago and beyond, Hotline has to give him props for dishing out one of the few electroclash-era songs that actually holds up a decade later. Aside from his pulsating “Silver Screen (Shower Scene),” and say Fischerspooner’s “Emerge” and Soviet’s “Candy Girl,” there wasn’t much substance in the early-2000s New York City electronic scene that was built on Larry Tee’s Brooklyn-goggled vision of shallow-glitz style and endless 4 a.m.-forever partying.

But hey, I dug it – the Berliniamsburg and Mutant parties at Luxx were tons of fun. And while it may have in part led the groundwork for today’s electro and synthpop over-saturation, the music – as a whole – didn’t really define the era. But pop on “Silver Screen (Shower Scene),” as well as his “Bugged Out” mix that dropped a few years later in 2003, and Felix stands strong. You might even suggest “Silver Screen” was one of the first electro-house / nu-rave / blog house / whatever banger anthems that are in every club these days.

In any event, Felix Da Housecat is at Underbar tonight, the same Tremont Street joint that housed the Sweat party with Steve Aoki a few weeks ago. Should be goodtimes, and local cats Michael Savant and Texas Mike supply opening duties. Details on the flyer and Facebook invite page.

Posted by Michael Marotta at 8:52 AM