Hooray For Earth @ the pill tonight

My bio-blurb from the pill boston dot com on tonight's party at GS: 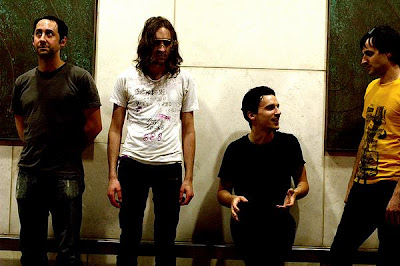 Friday September 18: Hooray For Earth
a jittery display of dirty-pop celebrations
The last time Hooray For Earth played the pill, they were called Raymond, we were in our first year at Great Scott and they busted out a pretty dope Placebo cover that had us all whacked out. Well, we figured it was high time to do another dance with the infamous Boston-NYC dirty-pop dudes, and together we aim to slay Allston Dance City in a fiery display of know-better rock this Friday night at the pill. The jittery, loud lo-fi buzz-rock of Hooray For Earth has always defied categorization and labeling (see?), but New York blog Jonnyleather.com rounded up a few recent praises all tidy-like: Says NPR: "With an ear for both '80s-inspired synth pop and contemporary indie rock sensibilities, Hooray For Earth falls somewhere between The Magnetic Fields and Voxtrot." Check. Says Bostonist: "With their self-titled debut, the members of Hooray For Earth sought a middle ground between Nine Inch Nail’s industrial thrash and the grunge force of Nirvana." Check again. Says RCRD LBL: "Think Joy Division plus Guided By Voices plus a lot of narcoleptic visions." Check City, population: you, Hooray For Earth and the pill. Do it up nice and look sharp.

Catch a preview of Hooray For Earth, including the delicious jam “Take Care,” over at www.myspace.com/hooray4earth, and while you’re digging, try to find their Christmas song from last year, “I Hope You Get Coal.” Before and after the band, DJs Ken & Michael V spin Britpop, Modern Indie & Beyond at Boston’s best dance party, 12 years running this October.
Posted by Michael Marotta at 7:46 AM