Friday night we unveiled the lineup for the 7th annual pill Halloween Show, going down Friday, Oct. 30 at Great Scott in Allston Dance City. On tap this year: The Daily Pravda as RADIOHEAD, Televandals as THE CLASH, The Honors as THE SMITHS and Lindsey Starr & The Chemical Smiles as THE SOUNDS. 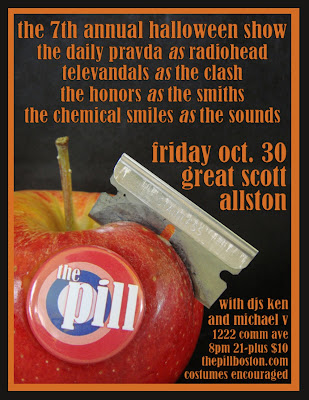 Previous lineups:
2008: The Perennials as THE STROKES, Sun Lee Sunbeam as ELASTICA, Wonderful Spells as THE KINKS
2007: Daily Pravda as DAVID BOWIE, Mako as THE STONE ROSES, The Perennials as THE LIBERTINES, Lie Society as BLUR
2006: Lifestyle as NEW ORDER, Daily Pravda as SUEDE, the 8mm Fuzz as ECHO & THE BUNNYMEN
2005: Protokoll as BAUHAUS, Emergency Music as THE VELVET UNDERGROUND, The Chainletter as JOY DIVISION
2004: The Information as DEPECHE MODE, Bon Savants as PULP, Emergency Music as BLUR, The Cignal as PRIMAL SCREAM
2003: The Information as THE CURE, The Cignal as HAPPY MONDAYS
Posted by Michael Marotta at 1:14 PM