Super silly fun time live dance party down at Great Scott tonight, which boasts one of the best show lineups in a while. Here's what I wrote for today's Great Scott mailing list:

THURSDAY 09.03.09 Tigercity with Lifestyle (CD release), Mystery Roar and The Emeen Z Band
Well fucking hell check out this back-to-school live dance party lineup. Let's be hospitable and start with the out-of-towners. I once called Brooklyn's Tigercity the Maroon 5 for the hipster generation for Spin.com and I don't think they liked that, but really, I meant it as a compliment. Slick, well-oiled pop songs with a banana-hammock purr, I dare you to not chill fierce listening to "Fake Gold" on your iPod. It's what Kenny Loggins wishes he could come up with in the 2k9. Complementing them perfectly is Mystery Roar, Boston's next big thing who pull the funk-disco-soul sound off without even trying. It's fairly remarkable, and totally irrelevant the members are ex Cassette, Information, Westward Trail and two-fifths Bon Savants. They stand out on their own sexy bear-skin rug shag fest merit. And though I'm running out of space here, Allston synthpop legends Lifestyle tonight release their "lost" album from 2005 or so, "Adventure." I mean, come on, how could you not be at this? Do you hate fun? I'm not fucking around. Damn. 18+ 9pm $10.00 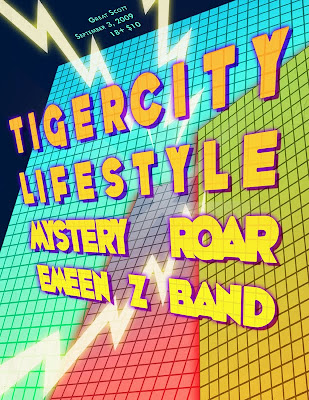 Posted by Michael Marotta at 8:35 AM