Once again, pulled from my Hotline blog (I swear I'll get more original content up here eventually, but I'd be writing about this here anyway and the Herald pays my bills and Vanyaland doesn't haha): Hotline concert love: Perez Hilton presents Ida Maria, Ladyhawke, Semi-Precious Weapons and Frankmusik, House of Blues, 7pm, $27 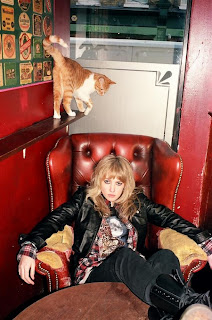 Love or hate Perez Hilton, the man has decent taste in music. And tonight he brings a pretty sterling dance-centric bill to the House of Blues on Lansdowne Street, which is safe for concert-goers as the Boston Red Sox have the night off (whew!).

Leading the “Perez Hilton Presents” gig is New Zealand electro-pop princess Ladyhawke, who has joined the likes of La Roux and Little Boots in leading a new wave of female fronted dance music that appears ready for mainstream takeover. Her cuts “My Delirium,” “Paris Is Burning” and “Back Of The Van” are already dance party staples in Boston and beyond, and word on the street is her live show is just as impressive as her eponymous 2008 debut album. There’s a heavy ‘80s synth-pop and underground rock influence here, drawing from the likes of OMD, Kim Wilde and Til Tuesday, but the songs sound fresh and have their own personality.

Born Pip Brown and recently having done time in the UK music scene, Ladyhawke cites her ‘80s upbringing against the backdrop of Stevie Nicks and Joan Jett as heavy influences. But it’s a keen sense of new wave allegiance that’s putting her on the musical map, and tonight we get to see just how legit she is. Many try to cop this sound, few succeed in being relevant a few years later. With La Roux and Ladyhawke, staying power isn’t out of the question.

Also on the Hilton bill is headliner Ida Maria, a Norwegian indie-pop belle who got some Hotline love before her free FNX show in Waltham a few weeks ago and rides high on the hit “I Like You So Much Better When You’re Naked.” Support also comes from NYC’s Semi-Precious Weapons, a spunky neo-glam rock band that had a semi-hit in club land with “Magnetic Baby” but failed to jump to the big time (perhaps from lack of great songs), despite an electric stage show by front man Justin Tranter. British keyboard kid Frankmusik rounds things out and opens up.

Beginning to end, this should be one fun show, and the venue should prepare to dance. Here’s a video primer on the ultra-fab Ladyhawke (love this first vid):