Once Saturday night lessons learned set in and the fickle allure of NFL Week 1 wears off, there's Sunday night staring up right in the face. There's always Tool Academy 2 to cradle your Sunday night malaise, but here's one better: Telefon Tel Aviv at Great Scott. Here's what I wrote in this week's GS mailer, which goes out each Thursday, after the flyer jump... 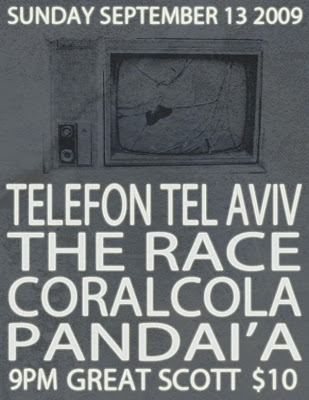 SUNDAY 09.13.09: Telefon Tel Aviv with The Race, Coralcola, with DJ sets by Pandai'a
Several months before there was the Summer of Death 2009, there was the unexpected passing of Charles W. Cooper III, one-half of Chicago-based ambient electronic duo Telefon Tel Aviv. His life ended reportedly via suicide in January, and despite TTA's role in the underground electronic community, it didn't get the same attention as more prominent yet less talented musicians. Since then, Joshua Eustis has resurrected the BPitch Control Label group, enlisting an old friend to fill the void left by Cooper while on stage. If there are any haunting elements in TTA's lush, dream-scape sound, they'll be circling the Great Scott compound like ghosts of my love life past on Sunday. Another perfect end-of-weekend show, roll up early for the ambient-techno flush of Worcester's Coralcola, as well as Boston's queen of dubstep, Pandai'a, who should make everyone forget about work the next day.
18+ 9pm $10.00
Posted by Michael Marotta at 6:52 AM