So I'm going to see the Horrors tonight (local Asian-influenced neo-shoegazers 28 Degrees Taurus opening!! Fuck yeah!) and I waltzed down memory lane, recalling when the band were booted from Great Scott after smashing a ceramic bust of Elvis Preseley. The bust still has not been replaced, and everytime I peer out to the empry shelf near the Keno screen, I shed a single tear for the King.

Anyway, here's what I wrote the day after the "incident," appearing in one of my first Hotline blog posts, dated March 14, 2007. Where does the time go... 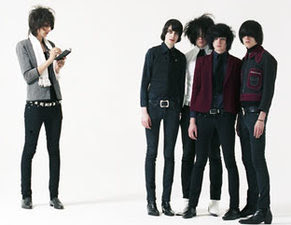 The Horrors get booted from Great Scott

Last night at Great Scott in Allston, UK buzz band the Horrors came in with a bang and went out with a break.

What was initially a pretty mesmerizing 30-minute Bauhaus-worshipping set came to a crashing halt about three-quarters through, when spooktacular singer Faris Badwan decided to climb up onto a ledge (at the other end of the venue, mind you) and grab a two-foot tall porcelain Elvis Presley bust from high atop Great Scott. For those familiar with the venue, the bust was near the ceiling next to the Keno TV screen, by the entranceway.

Badwan (who must have graduated with honors from the Nikki Six Aesthetic Academy) carried the bust back towards the stage, and smashed it into a hundred pieces onto the crowded dance floor. No one was seemingly hurt, but this action caused the set to be instantly aborted and the UK neo-goths were told to evacuate the venue immediately.

They did, and the night was over. All before midnight.

Badwan left Great Scott in a huff, claiming he was spit on by one of venue’s staff. I wouldn’t doubt it happened, as there was a brief scuffle once the bust was destroyed, though I didn’t see it occur.

It was a shame, because while you won’t be humming the band’s songs in your head anytime soon, the creepy five-piece sure know how to put on a show. But Badwan’s frequent jumping down onto the dance floor, where he practically lassoed crowd-goers and at one point appeared to punch a female onlooker in the chest, grew pretty stale. It did, however, get the crowd dancing, even if the invitation brought on one bald-headed buffoon who tried to mosh with the all-female front rows. Peter Murphy must be proud.

It seems Badwan’s aim is to shock, and well, they are called the Horrors. (Even Spin magazine reported he sparked a melee at CMJ last October after claiming to be spit on – seems like a trend here.) But his antics last night added nothing extraordinary to the evening, which, until his lame-o shtick took over, was maybe the Show of the Year in this early 2007. The Horrors, indeed.

This entry was posted on Wednesday, March 14th, 2007 at 11:26 am and is filed under General. You can follow any responses to this entry through the RSS 2.0 feed. You can skip to the end and leave a response. Pinging is currently not allowed.
Posted by Michael Marotta at 11:44 AM