Did today's Boston Herald A&E cover story some of the designers behind the local scene's coolest rock show posters. Was a fun story to do...
Poster Children: Artists Help Promote Local Music Scene 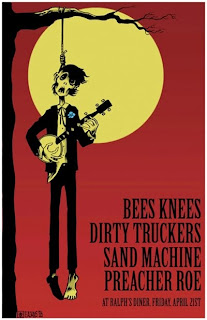 Call it art for rock’s sake.

From street poles and bulletin boards in Allston and Cambridge to listings on Facebook, rock concert poster art - which gained traction in the San Francisco psychedelic music scene of the ’60s and developed a cultlike following in years since - is as vibrant and prevalent as ever.

In the 2000s, the art form has exploded on the scene in a fit of amateur and professional creativity. In an age where anyone can get into graphic design using Adobe Photoshop or Illustrator on a home computer, the culture of rock poster art has mushroomed.

“The most important thing is creating art,” said Tom Gallo, a 28-year-old Somerville graphic designer who plays in the rock band Violet Nine and creates the visual identity of the Ryan’s Smashing Life music blog.

It seems that in Boston - a city with thriving art, design and music scenes - there are as many graphic designers as musicians. And every clique has its own idea of what makes a great concert poster - one that fans will hang in rehearsal spaces or bedroom walls and keep looking at long after the show it’s promoting has passed.

“You walk the line between a cool piece of artwork and advertising,” said 38-year-old Ian Adams of Allston, who designs ghoulish rockabilly-themed posters for his band, 8-Ball Shifter, as well as for shows at O’Brien’s Pub. “People need to be able to read it. The art is great, but ultimately the idea is to communicate properly.”

Nicole Anguish, 39, started making artwork for her punk band, the Decals, because she had skills that extended beyond music. 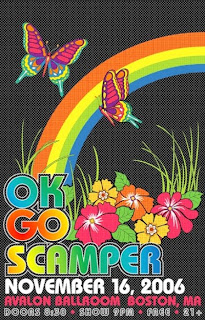 “I was the only graphic designer in the band,” said Anguish, who now does design full-time, including developing iPhone applications for kids. She displays her work on her Web site, daykamp.com.

“I was friends with a lot of people who were in bands,” Anguish said, “and I went from there.”

Neal Cadogan, owner of Somerville’s T-shirt design and printing company Hemlock Ink, started out working in copy shops, where he would create fliers for his roots rock band, the Johnny Come Latelies.

“Lots of time left alone with photocopiers, X-acto knives and gum paste,” Cadogan, 35, said to explain the genesis of his poster work. When not printing T-shirts, he now designs about 70 concert fliers a year for local and national bands. He believes that the increase of new designers is directly related to the increased availability of design software.

“You could tell Illustrator is making an impact,” Cadogan said. “There’s a whole generation of designers out there who don’t design anything. The key is trying to mix it with other media and make it your own.”

One measure of the growth of music poster art is Gigposters.com, an online archive for followers and creators of rock concert art. The Web site currently features more than 109,000 examples of poster art, close to 100,000 bands and some 8,500 designers.

Like Cadogan, Gallo thinks the accessibility of tech tools is driving the influx of new designers. That so much of their work is unoriginal does not detract from the excitement of witnessing so much activity and interest. 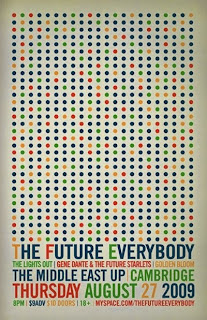 “It’s like with Pro Tools and music,” said Gallo, who showcases his work on tomgallo.org. “Everyone has Photoshop. There is an overload of work that is not authentic and not high quality, but I welcome all of it.”

Adams names Austin, Texas, designer Frank Kozik, who helped spark the poster art revival in the ’80s, and Sub Pop Records illustrator/cartoonist Charles Burns as influences. He draws most of his art by hand, then incorporates the text into his design as he finds the balance between being true to his art and pleasing a client.

“Visual language has gotten pretty intricate,” he said. “You’ll see themes repeated over and over. But I get psyched when I see people challenge the medium.”

Are posters art or advertising? It seems that in the case of rock posters, beauty is in the location as well as the eye of the beholder.

“When a poster gets framed in a basement somewhere, that’s art,” Anguish said. “The whole purpose (of a design) is to get it stuck in your head, like a song. Rock posters don’t pay the bills, but that’s the fun stuff.”

To see each week’s Boston nightlife posters, go to Michael Marotta’s Hotline blog every Thursday at bostonherald.com/entertainment.
Posted by Michael Marotta at 10:23 AM