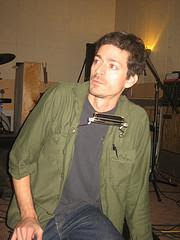 Speaking of grunge, anyone remember Verbena? The late-’90s Alabama trio was quickly - and unfairly - written off as a Nirvana rip-off, which might have had something to do with its crunchy-punk sound and the fact that Dave Grohl produced its 1999 major label debut, “Into The Pink.” (Check out the still-lethal “My Baby Got Shot” for a refresher track.)

Posted by Michael Marotta at 8:09 AM