Another slice from my Cheap Thrills column, but Thunderdome should stand alone on its own merit. I'm bullshit (as always) this falls on a Friday (I wanna go!!!), but I cannot deny this sheer awesomeness going down tomorrow night. It's cool though, we got Hooray For Earth down at the pill, so everone wins. As written... 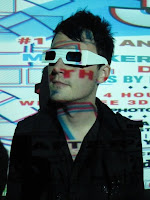 People have every right to be skeptical of things billed as three-dimensional experiences - after all, we’re still livid about the cultural short-shrift of “Jaws 3-D” in 1983. And don’t get us started on “The Final Destination.” But now, along come the Thunderdome kids, who have been known to throw some of the biggest hipster dance parties Boston has ever seen. For their first bash in 10 months, Thunderdome slides from Central Square to the South End with the gentle ease of a crossfader nudge in their most ambitious project yet. It’s four hours of a 3-D multimedia landscape, augmenting the techno sonics of DJs Baltimoroder, DevNull and Mistaker with the constant visual experience along five projector screens of VJ Robotkid, who, when not in the clubs, spends his days as Josh Randall, the creative director for Harmonix. And making their live debut is fellow Thunderdome organizer Michael Potvin’s new electro duo, #1 Dad & DJ Fred Mertz. Stops? Consider them all pulled out. In 3-D, of course.
Info: myspace.com/onemanleave; search Thunderdome 3D on Facebook 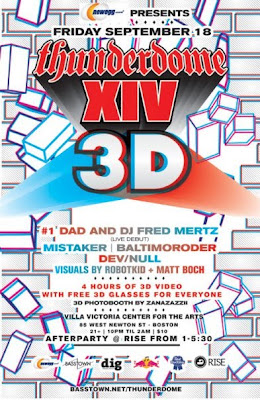 Posted by Michael Marotta at 9:55 AM