Slick Idiot at TTs, Provocateur to upstage them

From today's Hotline on the Slick Idiot / Provocateur gig at TTs tomorrow: So you caught KMFDM over the weekend at the House of Blues and just can’t get enough of that German-craze boot-stomp industrial noise we all knew and loved in tenth grade? Well, in a stroke of booking coincidence, former KMFDMers and Pigface members En Esch and Guenter Schulz hit T.T. The Bear’s Place in Cambridge tomorrow night with their punk-dustrial band, Slick Idiot.

Esch has come a long way from 1993 solo album “Cheesy,” and… ok, well maybe not. But hey, it’s En Esch. That’s got to count for something, right? As the lyric of “Light” went, what KMFDM did for you, was so good for you. 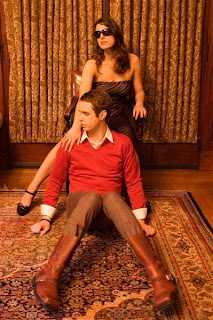 But anyway, give T.T.’s heavy props for setting this gig up with some fantastic local live and dance party support. DJ Chris Ewen of the Heroes new wave party spins before, between and after the bands, and Boston-based dark-pop quartet Provocateur gets things started live in a set-up that’s ripe for upstaging.

After a few years of figuring out their sound, mixing darker elements of glossy electro-pop with a newer wave of Electronic Body Music flair, Provocateur is now poised to break out beyond the underground music circles. They even caught the attention of Los Angeles-based electro tastemakers IHEARTCOMIX, who posted this tidbit regarding the band and singer Matthew Connor to its blog earlier this month: “By chance I came upon this band from Boston called Provocateur and this boy has some sexy damn vocals. They just finished their debut album and I can definitely see some great dance remixes coming out of their work in the future.”

Hotline would love to see the band hook up with the I<3C crew, in any capacity. Listen to two Provocateur tracks, “All Your Friends Are Naked” and “Boy’s Gotta Do” on the IHEARTCOMIX blog, or go the MySpace route and get acquainted there.
Posted by Michael Marotta at 9:16 AM