This ran over the weekend, a piece in the Herald where I ponder: Is Boys Like Girls the most unappreciated Boston band in ages? Hmmmm... 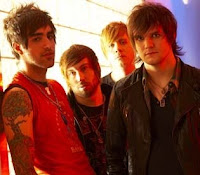 When Boys Like Girls arrive in Japan on tour, throngs of fans wait at the airport, holding up signs and snapping photos.

Back home in Massachusetts, it’s a different story. Members of the chart-topping, million-selling pop-rock band are rarely recognized.

In a city that loves a success story, Boys Like Girls might be the most unappreciated Boston rock band ever.

“They’re definitely not the most recognized group,” said Kendra Hajjar, producer of WXKS-FM’s (Kiss-108) “Matty in the Morning” show. “And that’s sad because their music is fantastic. It’s very weird. They’re so local and so reachable.”

Boys Like Girls, which brings its ultrapolished, emo-flavored rock to Patriot Place in Foxboro for a free concert SUNDAY at 2 p.m., boast impressive sales figures and global popularity. Their eponymous 2007 debut album for Columbia Records went gold, selling more than 700,000 copies worldwide. They’ve racked up three million digital singles sales - 1.5 million of “The Great Escape” and 900,000 of “Hero/Heroine,” both off their first album. And new single “Love Drunk” has sold 400,000 units and is a Top 20 hit on iTunes.

The group that Spin.com named 2007 Artist of the Year has had a remarkable run. Did anyone in their hometown notice?

“What bands used to do is tour around the local scene and gain popularity through that,” said Boys Like Girls guitarist Paul DiGiovanni. “We did that for a little while, playing VFW halls, but then set out on tour. We tried to kick off at a national level. We’re just not a band that toured Boston for years.”

Beyond Kiss-108 - which hosts the group in the studio Monday - the band never got much play on New England rock stations. And they never played smaller clubs such as the Middle East or T.T. the Bear’s Place. One of their first headlining gigs in Boston was at the 1,000-capacity Axis on Lansdowne Street. They sold out Tsongas Arena in Lowell last month.

“Boys Like Girls kind of went national quickly as a band, which isn’t to say they didn’t pay their dues in the local scene,” said Josh Smith of booking company MassConcerts. “Your averagemusic fan may not even be aware that the band is from the area.”

In Boston, the Celtic-punk of the Dropkick Murphys is revered. The dance-pop of Passion Pit has indie cred. The avant-garde Dresden Dolls are part of the city’s underground art-rock lore. And yet none of them touch Boys Like Girls’ worldwide appeal.

DiGiovanni is quick to point out that the band, whose members all hail from Boston suburbs, always felt love from their home city. But not that much.

The Hub has a lot of catching up to do.

Smith argues that Boys Like Girls is just not on the radar of local music fans, having come from an all-ages scene that appeals to suburban teens.

“The average age of a Boys Like Girls fan is around 14 or 15 years old,” Smith noted.

“I hope we get a few thousand,” DiGiovanni said. “Hopefully it’s set up for a lot of people to show up.”
Posted by Michael Marotta at 7:59 AM