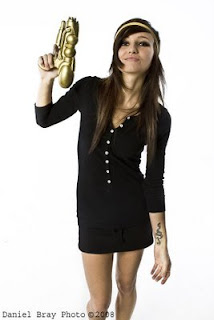 Already one of the most beautiful girls to ever walk this planet, the musical props are steadily building (told you so): 16 million plays on MySpace, a 2009 Juno (Canadian Grammy, basically) for "New Artist of the Year," a cult-like online presence, impressive slots on the Warped Tour and airtime on Old Navy commercials and "The Hills." I'm always a sucker for electronic girl-pop, but this just puts me over the edge.

I want to type smiley-face emoticons and pair up <'s with 3's when I listen to this. The video below, for "Saviour" has pulled 625,000+ views since arriving on MySpace Aug. 8. She's opening for Keane across Canada this fall, with some US dates to be added soon.

Her show at the Middle East upstairs was near religious experience, and despite being 30 years old I bought a fucking t-shirt, and got her to sign my just-purchased EP as I acted like the most uncool dude ever at the merch table. Yes, I have issues. I might have called her the next Sara Bareillis or something to that effect in the Herald, but it's just so much better than everything else out there like that. As she describes it, her music is "soft, but not pussy-soft, you know?" Sadly, yes, darling miss Valerie Poxleitner, I do.

Posted by Michael Marotta at 1:41 PM