Since Age Rings abruptly clocked out earlier this year, I've been really excited to see where Ted and Will musically head to next. The answer: Hot Protestants, a gritty rock n roll project that was super worthy of a (return) show at the pill, with an EP that's getting people talking. Download that shit here, peep the bio from the pill boston down below, and join us tonight at Great Scott. Doors at 10, $5 cover, Britpop & Modern Indie spun by yours truly and DJ Ken before and after ze band: 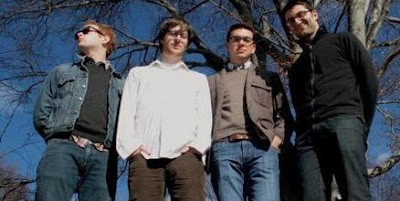 AUGUST 14: Hot Protestants: According to 2005’s “World Religions and Democracy” study, there are more than 800 million Protestants worldwide, comprising of roughly 13 percent of the global population. But rarely do any rock out, and, in even fewer circumstances, end up being relatively attractive. So the pill stands on the edge of enlightenment this week as the dapper lads of alt-rock luminaries Age Rings re-emerge from the seedy Boston rock underworld with a new project, aptly dubbed Hot Protestants. With a debut EP released in June alongside Ethan Dussault and Nick Zampiello at Cambridge’s New Alliance studios and a role this fall as the Angry Inch in the Arsenal Center for the Arts’ production of “Hedwig & the Angry Inch,” Hot Protestants not missed a biblical beat since Age Rings dissolved in April (their last show was at the pill, we think). Drawing from influences like Sloan, the Replacements and Cheap Trick while singing about late-night texts and assholes in nightclubs, these new Protestants are on a crusade of modern rock deity by moonlight. Have faith, young lover.
Posted by Michael Marotta at 9:36 AM