'Rescue Me' dude: Act to rock, rock to act

Recognize this dude? He's in the TV show "Rescue Me," and also has a (pretty terrible) band, (the even more terribly named) Apache Stone. But celebrity trumps all, and he's at TT The Bear's in Cambridge Wednesday night, per today's Hotline column. The band photo down below might be the biggest LOL Factory since the premiere of "Real Housewives of Atlanta II"... From ‘Rescue Me’ actor to Stone-cold rock star 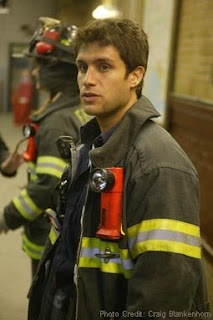 A guest spot on a TV show doesn’t guarantee success for a band.

But a band featuring a prominent character on a television show? That should at least be good for a few touring gigs. And it is.

Apache Stone, a radio-friendly New York rock group fronted by Mike Lombardi of FX’s “Rescue Me,” hits T.T. The Bear’s Place in Cambridge Wednesday night. Fans of the show should know what to expect. The band has gotten to both act and perform on the show this season.

When the “Rescue Me” writers added a rock band to the story line, Lombardi - who plays Mike “Probie” Stiletti - seized the chance to bring in his real-life musical buds. Since then, Apache Stone has been getting significant face-time on Denis Leary’s Emmy-nominated series. All the members had speaking roles in last week’s episode.

The band’s Pearl Jam-meets-Daughtry-flavored self-titled debut album is out now.

He’s not the first celebrity to bring his real-life band to T.T. the Bear’s, only the latest. In January, to name a recent Central Square star sighting, Adrien Grenier of “Entourage” came to T.T.’s to play with his band, the Honey Brothers. And if we’re counting celebrity kin, here’s advance warning: Meryl Streep’s son, rising singer-songwriter Henry Wolfe, hits the same club Aug. 18. 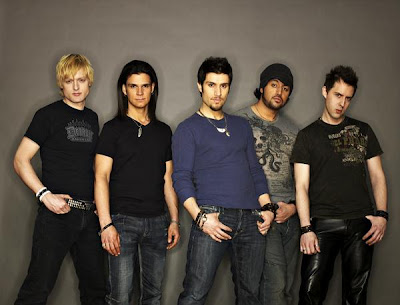 Dude on the right has a problem with authority, I think. And why didn't one guy get the thumbs-tucked-in memo? And isn't that the singer of Fuel on the left? I bet all these guys get their hair cut at an edgy rock n roll salon in South Boston.
Posted by Michael Marotta at 7:57 AM

Labels: In the Papers, Kill Me Now, WTF