The Sounds hit the House of Blues Sept. 16

Holy canola, talk about ambition! The Sounds have launched a massive world tour, which brings them to the House of Blues on Sept. 16. Kinda big for them, eh? I LOVED the Sounds when that first album broke a few years ago, and while Ihaven't been up too hard on their recent stuff, I'm feeling all Papa Bear watching them explode. Such cool people, and worthy of fame. From the Hotline blog, and jesus fuck look at those dates! 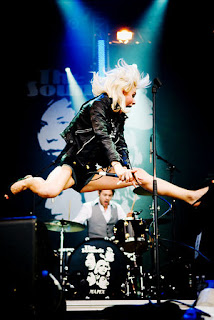 Nothing is better than seeing a band at a large venue while reminiscing how you once saw the same band in its early years at a club show with a handful of people. That seems to be the sentiment behind Swedish indie-wave band the Sounds, who play the House of Blues on Sept. 16.

Wasn’t too long ago they were packing out a sweaty T.T. The Bear’s in Cambridge (no, it really wasn’t) so this venue up-sizing is pretty ambitious.

But the Sounds have always had a dedicated indie rock cult following, and after completing a three-month stateside swing with No Doubt and an arena tour in Europe with Fall Out Boy, perhaps the band is ready for prime time on big stages. With a modern electronic rock sound winking suggestively at retro-based new wave pop, they certainly have the hooks as well as the chiseled Scandinavian looks. Charismatic vocalist Maja Ivarsson, a modern-day Blondie, is quite the sparkplug on stage and a budding star.

The House of Blues gig is the fourth stop in a massive 75-date world tour supporting new album “Crossing the Rubicon” that concludes in Helsinki, Finland on Dec. 19. So at least we’ll get the boys and girl all fresh and clean.

No word on ticket on-sale information just yet, but we do know support on the U.S. dates will be Cincinnati rock kids Foxy Shazam and a host of DJs. Check out their world-tour itinerary, action packed into four short months:

Posted by Michael Marotta at 9:54 AM