Way cool event going on Saturday night at the Middle East, when the Boston Band Crush kids present One Night Band, taking 40 musician and pairing them up randomly in eight quintets, all to rock out later that night. Will it rule? Will it crash and burn? Who knows. I wrote about it in today's Herald, also pasted below: Randomly formed bands to rock One Night only 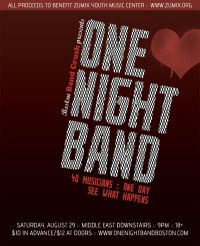 As long as there’s been a music scene, local bands have come and gone. But Saturday stretches the definition of “short lived” as eight new bands form in the morning and then break up sometime around last call that night.

That’s the hook behind One Night Band, a musical experiment that takes 40 local musicians, teams them up randomly in bands of five, stashes them in eight different rehearsal spaces from Allston to Hyde Park and lets them take the stage later that night to unveil new material at the Middle East in Cambridge.

It’s as if “Project Runway” and “Rock Band” merged, and even the organizers, the folks behind local music blog Boston Band Crush, aren’t sure what to expect.

“The music can end up being ridiculous,” said co-organizer Ashley Willard, who admits to lifting the idea from - and with the blessing of - Chris Weber’s Rock Lottery concerts that started in Texas in 1997. “We needed to pick people we knew would take a leap of faith and trust us that we could pull this off. I think everybody’s excited because it’s something new and different.”

The 40 participants include one member each of such bands as the New Collisions, Logan 5 & the Runners, the Beatings, Static of the Gods, Hands & Knees, The Fatal Flaw and Diamond Mines. Only three bands - Aloud, the Luxury and the Lights Out - have two participants, guaranteeing the musician groupings will be fresh.

“We think they’ll stick to a rock band format, but maybe they’ll be more willing to experiment since they have nothing to lose,” said co-organizer Michael Epstein. “We’re hoping to push them out of their comfort zones.”

While One Night Band is marinated in musical uncertainty, there are some guarantees: Each new band will feature at least one bassist and drummer, to ensure a rhythm section. Each must write three new songs and learn one cover. And all proceeds from the night go to Zumix, an East Boston-based youth music organization, with Zumix’s teenage band Feedback opening the night’s festivities.

From there, it’s anyone’s guess.

“I like the chaotic, spontaneous nature of the whole thing,” said Aloud’s Jen de la Osa. “It’s going to be surreal.”

Not everyone will show up Saturday morning with a guitar or drum stick, and the most exciting possibilities could come if an old-school metal guy gets paired with a dance music-bred hipster.

“I don’t subscribe to the whole notion of a band, which is an outdated concept anyway,” said Michael Potvin of the Campaign for Real Time and #1 Dad & DJ Fred Mertz. “I’m going into this with an open mind, a bunch of drugs and probably a laptop.”

And of course, there’s the possibility of in-band conflict in the writing process.

“I’m hoping I get paired up with the craziest, most demanding egomaniacs in the whole thing,” said Brendan Boogie, jokingly. “Nothing is more hysterical to me than people who take things way too seriously only to have me ruin it.”

Added de la Osa: “There’s going to be disagreements, no doubt. The question is, what will it all sound like?”

Go to onenightbandboston.com for more information. Tickets: $10 in advance; $12 at the door.
Posted by Michael Marotta at 8:17 AM