Thursday brings us another round of my Cheap Thrills column in the Boston Herald, this week addressing Noir's "Mad Men" premiere party, a two-gorilla birthday bash and an entire gig dedicated to the Black Crowes. Talk to me, Angel.

You’ve adopted Tom Collins as your drink of choice, you’ve slicked your hair back for the first time since middle school and you’ve created an animated avatar of yourself on AMC’s Web site. Ah, the things we do to fill the void between seasons of “Mad Men.” But now the acclaimed drama is back, and Noir has all the cocktails and cigarettes Don Draper-wannabes could ask for. Watch the premiere on Noir’s big high-definition projection screen, nibble on snacks from the era and let your eye wander following that pencil skirt across the room. Noir is awarding prizes to the best “Mad Men” look-alikes, and won’t give you the stinkeye when you order another scotch.
Info: 617-661-8010, noir-bar.com 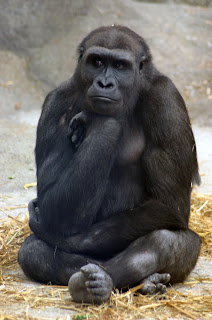 One Franklin Park Road, Dorchester. Saturday at 11 a.m., all-ages, free with park admission ($13 adults, $7 children ages 2-12).
Last time we got an invitation to a birthday party for girls named Kiki and Kira, we woke up the next morning on the beach in Provincetown with our clothes inside out. Chances are this one will be a bit more docile, even though there are great apes involved. Ten-year-old Kira and her 28-year-old mom, Kiki, resident gorillas at the Franklin Park Zoo, are celebrating their birthdays together with a mother-daughter tea party at the zoo’s Tropical Forest. Snack on banana-themed treats from Braintree’s Konditor Meister Bakery and Green Hills Traditional Irish Bakery in Dorchester, and let the zookeepers find a gorilla-sized party hat.
Info: 617-541-LION, franklinparkzoo.org

CROWES FEAT
The Cover-Up’s tribute to the Black Crowes at Lizard Lounge
1667 Massachusetts Ave., Cambridge. Saturday at 8 p.m., 21-plus, $8 in advance, $10 at the door.
The third installment of Brendan Boogie’s The Cover-Up series brings a host of musicians all worshiping at one altar of mock rock. And in this case, it’s Atlanta’s bluesy hard rock band the Black Crowes getting the love. The Rationales, Old Jack, Trucker Mouth, Will Dailey and others, including Boogie himself, will take the stage and roll out the Crowes hits, talking to angels while shaking their moneymakers. And it’s not hard to handle - there’s no costume required at this gig.
Info: 617-547-0759, lizardloungeclub.com, thecoverupboston.com
Posted by Michael Marotta at 8:28 AM