Travis dudes at the Armory

Hey, remember when Travis released "The Man Who" and they were poised to become Adult Alternative's bad assed little helper but then Coldplay came along and got everyone's attention with vastly inferior songs and all we were left with were broken hearted memories and lyrical association from the best lines in "Driftwood" and suddenly Travis was an afterthought and we all felt bad but not really bad because even Fran admitted it always rained on him and at least they put out a few albums and never elicited hatred like other bands of their ilk and hey Travis is still cool, right? Well two of them are at the Armory in Somerville, and tickets are available now. 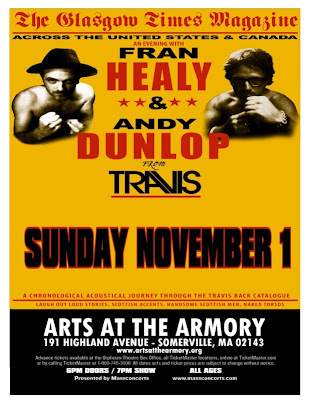 Posted by Michael Marotta at 1:21 PM