Posted on the Hotline blog: TONIGHT at TT The Bear's Place -- Gringo Star, with Rosewood Thieves and Henry Wolfe, 9 p.m., 18-plus, $10

Now Atlanta rock dudes Gringo Star is a band worth checking out on its own merit (would they win a sonic thowdown against Ringo Deathstarr?), but those with Hollywood eyes that stretch down to kin should roll up early to Cambridge’s T. T. The Bear’s Place tonight. 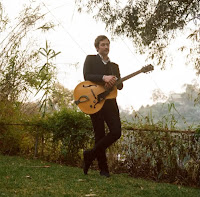 Folksy Los Angeles-based singer-songwriter Henry Wolfe, who opens the show and goes on around 9 p.m., is the son of actress Meryl Streep. An East Coast native, Wolfe first made the music rounds in New York City fronting the indie-pop band Bravo Silva (which I’m assuming wasn’t a reaction to the Seattle Mariners signing Carlos Silva for $48 million a few years ago, but whatever). Since relocating to the west coast, he’s been riding that time-honored singer-songwriter wave, and is starting to gain traction.

Wolfe’s latest single “Stop The Train” is featured in the Sony Pictures movie “Julie & Julia” and was released as a download-only single on Aug. 7. That might be his most well-known song to date, but “Orphans,” posted on his MySpace page, has been getting a few plays here at Hotline HQ in recent days.

And yes, we know that his mom Streep stars in “Julie & Julia.” That kind of stuff happens.

Posted by Michael Marotta at 9:15 AM