Straight from the pit of the Hotline blog: Expect a new album next spring from Brookline-born soul man Eli “Paperboy” Reed.

Reed, who performs with his band the True Loves, signed to Capitol Records earlier this week, securing a follow-up to 2008’s acclaimed debut “Roll With You.” The album was released on Virgin Records and Somerville-based Q Division. 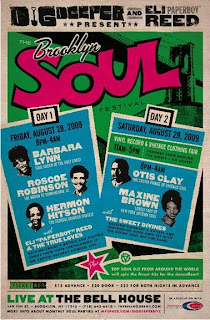 In 2007, Virgin merged with Capitol Records to create the Capitol Music Group, so the switch in labels is likely just an in-house reshuffling of the deck. The important news here is that we’re getting some new material from Reed (and his True Loves crew), who moved to New York last year. Here’s the official word from Capitol, along with details of the Brooklyn Soul Festival going down later this month:

On Aug. 28 and 29, Reed along with Dig Deeper will present The Brooklyn Soul Festival at the Bell House. The festival, which was co-curated by Reed and Dig Deeper, will feature two nights of performances by legendary soul singers from around the country, including Barbara Lynn, Roscoe Robinson, Hermon Hitson, Otis Clay and Maxine Brown. These unsung singers—rarely seen individually and never before together on the same bill—will be backed by two of the most in-demand bands in soul music today: Eli “Paperboy” Reed and the True Loves and The Sweet Divines. The opening night Reed will also be featuring songs from his forthcoming Capitol Records debut in between sets.
Posted by Michael Marotta at 11:24 AM