Interview with Megan (Wants A Millionaire)

I had a fun chat with Megan Hauserman of "Megan Wants a Millionaire" last week to hype tonight's premiere of her show on VH1. Looks like the usual awesome shit-show competition, and the only familiar faces besides Megan are fellow show veteran Brandi C. (co-host or some shit) and "Sex Toy Dave" Levine from Millionaire Matchmaker (contestant). Oh boy. Megan was a decent interview, much better than Daisy, but I was bummed she called 12 Pack "pathetic and disgusting" for being on "Daisy of Love." Do NOT insult David Amerman on my time. Otherwise it was standard fare, even though the network cut in when I asked about her lawsuit against Sharon Osborne, who smacked her up on the "Charm School" reunion. But this shit should be fun, and now the countdown begins until "Ray J 2" and the second "Tool Academy." 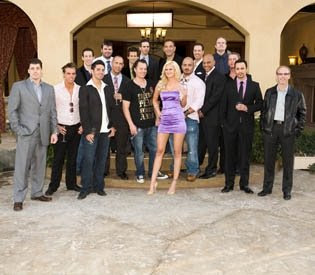 Posted by Michael Marotta at 8:00 AM