Major LOLz coming out of Lynn this morning, where Sam Yoon and Michael Flaherty selected the same song for their "My Song..." radio battle. (Details on the competition a few posts down). From my Herald blog: 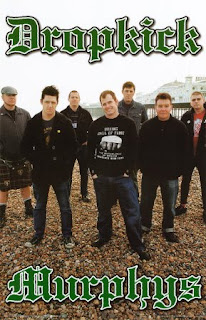 In this morning’s “My Song Is Better Than Your Song” competition on FNX Radio 101.7 FM’s Sandbox Morning Show (which Hotline detailed a few days ago), both mayoral candidates had a similar approach.

Yoon, a favorite of Sandbox listeners who had been undeafeated in the “My Song…” segement the previous five weeks, took home the win by a 3-to-1 voting margin. Votes were tallied by listener calls, emails and instant/text messages.

Tough break for Flaherty, who probably thought he had a shot at the upset by bringing in the Dropkicks. Not a bad plan, but Yoon, who had previously selected songs by Radiohead and the Violent Femmes, also went with the local punks.
Posted by Michael Marotta at 8:59 AM