Being suddenly single and free of relationship shackles has some advantages, one being able to go check out the Noisettes on a Monday night without barrage on tow. So I suppose that's where I'll end up this evening, unless some ex calls me up and drags me to the Neverending Story at the Battle. Life got interesting again. Here's the word on the Noisettes from the Great Scott mailer I whip up on Thursdays: 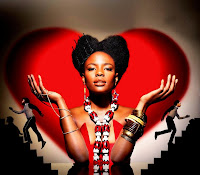 Straight outta London come indie trio the Noisettes, armed with one of the best songs of the year with "Never Forget You," a retro-hall swing that shows charismatic front woman Shingai Shoniwa offering a bit more Diana Ross than Skunk Anansie.

Just about done wrapping up opening slots for Lady GaGa in Europe (and if GaGa approves, that's all that matters) this will likely be the last mid-sized venue show for the Noisettes in the foreseeable future, and one of those times we're slightly red-faced about not having a green room. Shoniwa is a budding STAR, so attempt to approach her with a double-fist of PBR while you still can. 18+ 9pm $10 adv. / $12 door

Not sure why or how Vanyaland turned into a video blog, but fuck it, here's that jam:

Posted by Michael Marotta at 7:30 AM