Saturday at the Middle East: Up vs Down

It's quite the monumental decision, I figured we'd all need four days of planning for it. The Middle East has knocked shit out the box with it's Up Vs Down lineup this Saturday. Rock for all, all for rock. 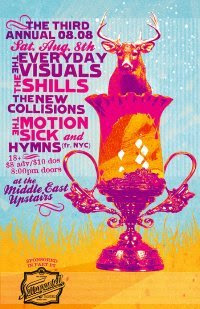 On the top, Dave Virr/Duncan of the ME/FNX has his third annual 0808 party, which I think celebrates his birthday. He's got one fuckload of a indie-fed lineup: Everyday Visuals, the Motion Sick, the Shills and New York's Hymns. Our local new wave darlings the New Collisions, like the flyer to the right now not-so-aptly proclaims, were supposed to be on this shazz, but the B-52s called and dragged them to Virginia to play for thousands. Hey, in Boston 2k9, it happens.

On the down low, Mean Creek and Drug Rug are doing that dually epic album-release party thing. They've enlisted the Needy Visions and the New Black Magic Rainbow Quartet, which by name alone, not suprisingly features a dude from Apollo Sunshine. I haven't heard the new Drug Rug -- but I want to, as everyone's already blown their load over this band's potential and suddenly I'm trusting what people have to say. Hey, in Boston 2k9, it happens.

Pick your poison here tonight, though I'm leaning on the Up and Up. Why doesn't the Mid East have a package deal? Either way, you can't lose. Toss in Chris Ewen's Heroes new wave dance party next door at TTs and the whole fucking Central Square corner might combust. 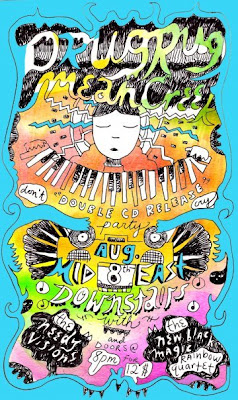 Posted by Michael Marotta at 1:15 PM