Kinda excited for Dear Leader swinging by the pill tonight, the first in their two-night weekend stand. Every time I see a listing for a DL show it's at the Paradise or somewhere much larger, so it'll be interesting to see what the door looks like around 11pm, when the band hits the stage. Bring me the head of the weekend. 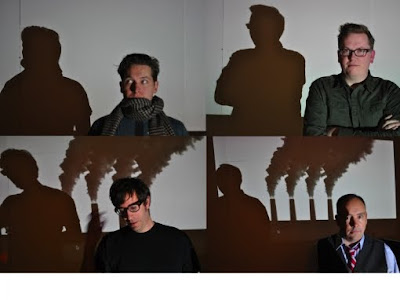 friday march 5:
Dear Leader
a second act in the modern rock parade
Way back in the strange times of 2005, the pill’s Michael V was living an alternative life while overseeing the seedier depths of the former Lansdowne Street rock strip, calling upon Sheila Divine for an exclusive New Year’s Eve reunion show. The band obliged, and a scant trace of clean respectability was brought to an otherwise wretched hive of scum and villainy. Years later, the legacy and sound of Boston’s legendary Sheila Divine lives on through the pulse of Aaron Perrino and his modern rock army Dear Leader. 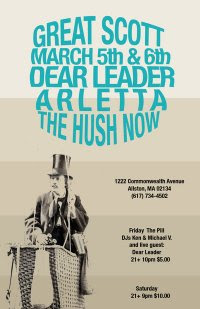 Sculpting politically and socially charged anthem rock for a post millennial world trapped within a twentieth century mindset, Dear Leader is a continuous shining light in this city’s ever-evolving underground sonic landscape. This Friday at the pill, the band kicks off Dear Leader Weekend with a turbo-charged sonic rock explosion across our increasingly synthesized dance floor.

Dear Leader augments our modern indie dance party in Night 1 before enlisting Arletta and the Hush Now for a Saturday night showcase entirely fit for the glory days of Great Scott’s first foray into a proper reflection of Allston Rock City, The Plan. Skipping venues twice the size of ours, Dear Leader has opted to pack the clubs over two nights in the name of the people. Join us for the dance-minded opening shot.

Before and after the band, DJ Ken & Michael V spin the best in Britpop, Modern Indie & Beyond at Boston’s best dance party, established in '97. Look sharp. xo

And next week, there is this; the Honors make their first pill appearance since "The Smiths": 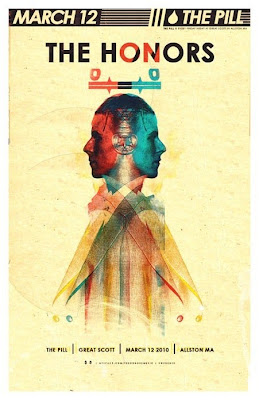 Posted by Michael Marotta at 7:56 AM