So tonight brings the highly anticipated make up show by Austin's Neon Indian at Great Scott. There are two separate shows: at 7pm with Bodega Girls, then a sold-out original gig with Mystery Roar and Southern Belle. What a night! Instead of repeating the repeatable, here's what I wrote in Thursday's Great Scott mailer (yes, "glowing braves, I wrote that what): 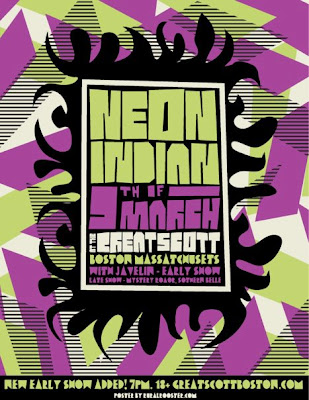 Ok, yeah yeah fucking evs, Neon Indian bailed last month, and the same night as their Great Scott gig the glowing braves appeared on Jimmy Fallon. Fine. There hasn't been a tribesman this in-demand since Grady Sizemore started roaming the green at Jacobs Field. It happens. But Boston wins in the end, because now we get TWO gigs out of it (on the same evening, in very unBostonlike fashion). The late show with Mystery Roar, Southern Belle and DJ Die Young is all sorts of sold out, but a new 7 p.m. gig has been added to the slate, and Bodega Girls have been cast to kick this shit off as opening act. That's Hafner-heavy for a Tuesday, and good luck to the door guys peeling melted faces off the floor in time to re-open doors at 9 for the late gig. Here's the pitch on Neon Indian from a few weeks ago, because I'm feeling lazy: "...Tonight, Austin comes to us wrapped in dance crazed locals as Neon Indian leads a heavyweight strobe-lit charge of electronic funk and daydream handclaps. Neon Indian is the one man show of Alan Palomo, with "Deadbeat Summer" coming in at Number 13 in Pitchfork's Best of 2009 poll." If you missed out on the original show, here's your second chance to dance with the electro pop wolves.


18+ 7pm $15 tickets
We Recommend: "Deadbeat Summer," by Neon Indian, everything by Bodega Girls
Posted by Michael Marotta at 10:10 AM