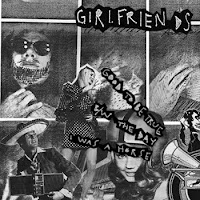 Certainly the Japandroids show tonight at the Middle East Down is worth checking out for the noise-pop headliner alone, who I once dubbed the best duo to emerge from Vancouver since Pavel Bure and Alexander Mogilny suited up for the Canucks. But like the trade that brought Cam Neely to the Hub a few decades ago, Boston might have the upper hand on the Canadian city once again after opener Girlfriends take the stage.

Hotline has had Girlfriends' lo-fi backseat jangle-pop jam "Good To Be True" on repeat since Ampeater gave it away a few weeks ago along with the single's b-side, a cover of the Vaselines' "The Day I Was A Horse." Both tracks are still available for free download via Ampeater, but we also recommend picking up the band's limited-edition cassette release on Floating Garbage Continent Records. The plan is simple: show up for Japandroids, but roll up early for Girlfriends, who hit the stage around 9 p.m. Sweden's Love Is All fills the gap in between, making this show a garage-pop hat trick worthy of a Bure highlight reel. While we try to get Trevor Linden on Line 1, check out this Girlfriends live clip from the folks at Extraneous Noise...

Posted by Michael Marotta at 12:00 PM