We'll see what they got. From Hotline: After teasing us rotten with shinny disko-dance tracks like “Solid Gold” and “Thunderbird,” New York City’s the Golden Filer will finally get all proper with the June stateside release of debut album “Voluspa.” Those club cats over in the UK get it next month through Brille Records, home to the Knife and Operator Please, so it should be making the interweb rounds shortly.

However, none of us have to wait for the glossy synth shine of first single, “Hide Me.”

To celebrate the Filter’s sure to be hyped-up and much-discussed three-show roll down at SXSW next week, the duo released the pulsating track for preview and free download via their website, thegoldenfilter.com. Catch a listen on the page, or submit your email for a free download. Check it via the link below: 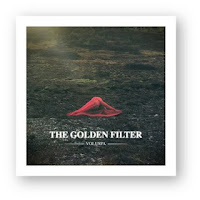 After messing with Texas, the Golden Filter will tour in May. Last time in Boston they dropped a quick and uneven set opening for the Presets at the Paradise, so hopefully they return this spring with the sound a bit more fleshed out and in a headlining capacity.

From the folks at Big Hassle: “On the long road home after a round-the-world tour, Penelope and Stephen returned to New York City to self-produce their debut album which casts glimpses into their unearthly world where goddesses, love, myths and mountains reign. With drum circles, string sections, field recordings, and lots of microphones, they've gone beyond disco to unveil where their secrets are shared and where their mystery dissolves.”

Sweet. Follow the golden fox, kids...
Posted by Michael Marotta at 11:14 AM