Haim it up: Brattle to screen 'Lost Boys' tomw

Hotline repost because the Brattle is awesome: “Sleep all day. Party all night. Never grow old. Never die… It’s fun to be a vampire.” -- Ain't that the truth. Three cheers to the Brattle Theatre in Cambridge, as tomorrow night it pays tribute to fallen teen idol Corey Haim with a screening of 1986 vampire flick "The Lost Boys." Let's show those "Twilight" kids how we did it back in the day...

Special Screening!
In Tribute to Corey Haim!
The Lost Boys
10:00 PM $9.75
Discount student tickets available at the door w/valid school ID. Brattle Member passes can be used for this screening. 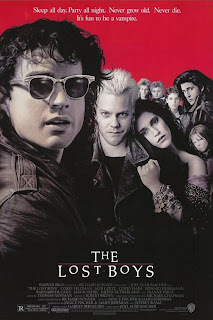 We were saddened this week by the tragic death of one of our childhood cinematic companions, Corey Haim. Haim established himself as a pop culture icon in the late '80s with roles in "Lucas," "Silver Bullet," "License To Drive," and, of course, the vampire classic "THE LOST BOYS."

As a tribute to Haim, we’re interrupting our regular programming to present a 35mm screening of his most iconic screen role – as Sam Emerson, a kid who moves into a small California town with his family and winds up confronting a group of vampires that plague the area.

Just to up the '80s ante, THE LOST BOYS also features Kiefer Sutherland in his creep-tastic, pre-24 years and Corey Feldman as Sam’s wisecracking, vampire-hunting compadre.

Wooo!
Posted by Michael Marotta at 8:07 AM