Piggybacking off my post in le Herald dot com: Hotline has been a fan of the insanely likeable Emeen Z for years now, both as a person and a performer in the local circuit.

But his new project Spirit Kid – which hits the Middle East in Cambridge tonight – has taken his sunshine-soaked Kinks-flavored pop to a whole new level. The former member of the Sterns began Spirit Kid as a solo bedroom project, but recently rounded out the sound with the aid of players from the likes of the Main Drag, Daily Pravda, Mean Creek and others. After scoring some stash airplay last year on Showtime’s series “Weeds,” Spirit Kid’s relentlessly catchy ‘60s pop-assault is now turning heads around town.

The head-jerking continues tonight in Central Square along with Golden Spurs, Some Say Fire and The Novel Ideas. The folks who put the show together, Extraneous Noise, teamed up with Foundwaves and passed along some live footage from a recent Spirit Kid performance, which we think was from last month's Middle East gig but we don't know for sure. Either way, it rules.

Things tonight get started around 9 p.m. and forking over $9 will gain you access to maybe the next Boston breakout band… Check it out... 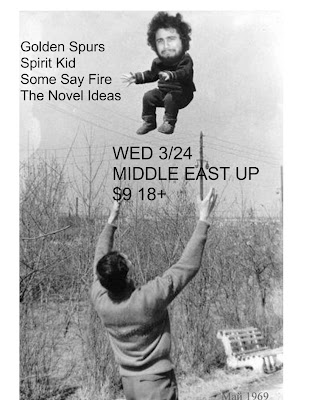 Posted by Michael Marotta at 9:31 AM