Ahh, blood in Allston, it's a not very rare occurrence these days. But tonight Florida splashes us in reverb hype glory as Surfer Blood washes up tonight at Great Scott? It's wikkid sold out. But, despite needing all musical things glossy, the Olympics have made me yearn for some NJ Devils action, and I might blow it off to catch the Parise Army play San Jose -- ironically, of course, the Sharks. Big decisions, 2k10. But this flyer is sweet, and my promo blurb from the GS mailer follows after the visual... 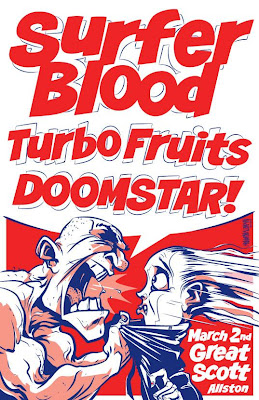 TUESDAY 03.02.10 Surfer Blood, Turbo Fruits (ex-Be Your Own Pet), Doomstar!
Ok, straight up: Did you get tickets for this jazz, because it’s just about sold out. If you were on the fence, here’s one last pitch, because by the time Mark Lind takes the stage tonight it might be too late: Surfer Blood are pretty much the only band from Florida right now, and will be the most talked about, blogged about, dranked about, whatevered about band at SXSW next month. Great Scott sonic ringleader Carl Lavin said last night that it scratches almost every one of his early ‘90s itches that don’t involve Phil Plantier’s sweet left-handed swing. Dude is crazy pumped for this show, and so are the 200+ other kids who planned their Tuesday night in advance. Debut album “Astro Coast” scored an 8.2 on Pitchfork, and they busted out all the proper name drops in the review: Weezer, Pavement, Dinosaur Jr. Ride this wave, people, you don’t want to be standing naked on the beach when shit is sold out.
18+ 9pm $8 adv. / $10 door details
We Recommend: “Swim (To Reach The End),” by Surfer Blood

Posted by Michael Marotta at 7:42 AM