Did a recap of SXSW for the Herald, which ran today. Kinda a different look from what I submitted (on Friday, no less) but the gist remains. Kinda, a little bit. Evs. 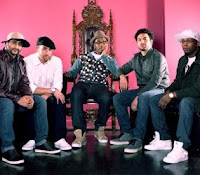 More than 2,000 bands filled 80 stages throughout downtown Austin during SXSW, which is essentially spring break for indie nerds eager to tweet about The Next Big Thing. Each day, showcases started around 11 a.m. and didn’t wrap until some 16 hours later. Numerous around-the-clock parties added a Mardi Gras vibe.

SXSW is mainly about seeing new bands and stumbling into a bar to find an unknown gem of an artist playing for a dozen people. Sure, you could catch Nas at the Fader Fort, Snoop Dogg at Perez Hilton’s party or Cheap Trick, which played a free show for 40,000 at Auditorium Shores.

The Bad Rabbits’ hip-hop collective is most likely to return to the Hub with a spot on the national radar.

But plenty of up-and-comers from beyond the Hub were making a name.

“Even if (a band is) playing South by Southwest in the middle of the afternoon at Denny’s, there’s a chance a guy like me will be there and remember it,” said Kevin Hoskins, talent buyer for Cambridge’s Middle East. Hoskins is able to catch about 120 bands each year at SXSW.

“For any young band,” he said, “South by Southwest is great for the opportunity to get in front of people involved with music.”
- mmarotta@bostonherald.com
Posted by Michael Marotta at 8:57 AM