I get so many CDs sent to me at work in the newsroom, I hardly listen to any. But I got this Von Iva disc in the mail a few weeks ago, and after being drawn in by the killer album art (yeah, I'm a sucker for a synth-playing gal, kill me) I was totally feeling "Living For It." It's rare anything I get turns out being this awesome.

But this San Francisco electro rock trio know how to bring the sultry synth-heavy goods, and they're at T.T. The Bear's Place tonight with the Hell on Heels tour, featuring the always entertaining and whythefuckainttheyfamousyet Semi Precious Weapons and Nico Vega. This snow might keep me locked inside, but this shit is def worth checking out on a lonely Tuesday in February. "Living For It" gets the crowd going at the pill each week without fail, and the pics on the ol 'Space hint at a pretty sexy live show. Damn you, Old Man Winter! 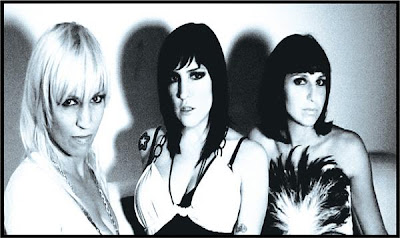 Posted by Michael Marotta at 10:51 AM