From my Cheap Thrills column in today's Herald, where I set a record for cheap pop culture references... 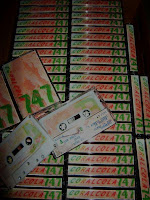 Last year duos were the new bands and this year solo artists are the new duos. Boston is becoming a breeding ground for one-man live-electronic-music producers, and now joining the likes of Andre Obin and Sunrise Swords is Worcester’s Mikey Lee, performing as Coralcola. Lee’s new “747” EP - released through digital download and at Saturday’s Robot Revolution electro dance party on cassette - has enough big-beat techno and ambient flavor to keep the strobe lights going way past after-hours. Download the EP for free at myspace.com/coralcola, then pick up the cassette at the party and rave on like it’s 1993. That old tape deck finally gets love, too.
Info: alchemistlounge.com, 617-477-5741 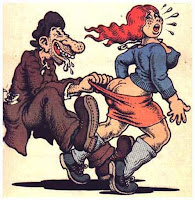 Philadelphia-born illustrator R. Crumb may be one of the most controversial cartoonists of our time, and this ongoing exhibit spans four decades of work, from his influence in the ’60s Zap Comix counterculture to his frequently satirical and critical view on American life. Acknowledged as the founder of the underground comics scene and pop culture icon through his “Keep On Truckin’ ” comic, Crumb knows a thing or two about “Cheap Thrills”: He designed the cover art for the 1968 album of that name by Big Brother & the Holding Company. If he’s good enough for Janis, he’s good enough for us.
Info: massart.edu/calendar, 617-879-7333

ORCHESTRAL MOVEMENTS ON THE CHEAP
$20 tickets to the Boston Symphony Orchestra
301 Massachusetts Ave., Boston; most BSO concerts until May 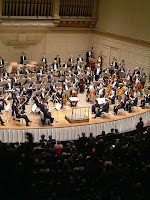 The great Diana Ross once sang with the Supremes, “Whenever you’re near/I hear a symphony/A tender melody/Pulling me closer, closer to your arms.” Clearly, date night at the symphony connects a direct line to a lover’s heart, but now the BSO lets you do it on the cheap. For a majority of the remaining BSO programs through May, concertgoers younger than 40 can score best-available tickets, normally priced $29 to $115, for just $20 each. Included in the promotion is tonight’s Project Mozart fashion event, where local designers create dresses inspired by the composer’s music, as well as this weekend’s all-Mozart program. When your flame thinks of you, make him or her hear a symphony. It’ll work better than reggaeton.
Info: bso.org, 617-CONCERT
Posted by Michael Marotta at 10:11 AM