Much news in the glorious land of local indie quintet Taxpayer! The band is readying a new album, titled “Don’t Steal My Night Vision,” and will celebrate the release of said album three days after it drops at the Paradise RC on March 13 alongside fellow local luminaries the Bon Savants and Age Rings. 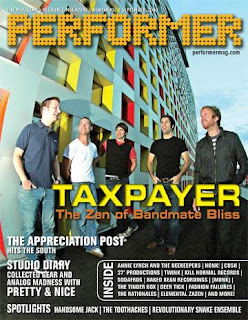 If there ever was a show approved by The Pill:Live!, this is it (they just gotta work on that Friday night nonsense) and tickets are on sale now through the Dise website.

Taxpayer, you may recall, had the raucously unrelenting single “When They Were Young” break into FNX rotation a few years ago, and this new jam could be the launching pad for national attention. Shit, everyone else in Boston is blowing up, why not these dudes? Clearly deserving.

Anyway, to help hype “Don’t Steal My Night Vision,” Taxpayer is also throwing two news songs up on the ol’ MySpace every Monday until the album’s release. Posted right now is lead single “We Have Arrived,” which hits iTunes Feb. 24, and Hum-like album cut “Night Vision.” The single has a really catchy Replacements vibe going on, and I’ve always appreciated Taxpayer’s very careful use of forceful guitar riffs. Everything is so deliberate on their songs, they translate well from FM dial to stage.
Posted by Michael Marotta at 12:04 PM