Faith No More to reunite!!!

Holy fuck! Pitchfork is reporting that Tripwire is reporting that Faith No More will reunite (sans guitarist Jim Martin) for a few European shows later this year. Everyone from me to the guy with "The Real Thing" flame-drip tattoo behind the Subway counter rejoice! 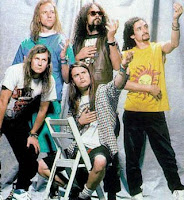 I consider "The Real Thing" a part of my Album Troika that set the tone for the 1990s (along with Jane's "Ritual de lo Habitual" and Nine Inch Nails' "Pretty Hate Machine") and it remains one of my fav discs (check the extended rap on the title track). I got into FNM at a very early age, loved everything from "As The Worm Turns" to the Brixton Academy live tape and vividly remember seeing them at age 14 at Roseland NYC for the "King For a Day Fool For a Lifetime" tour, which blew my pretty little metal-loving mind. "Angel Dust" sounds like it could have come out yesterday, and "The Real Thing," while now pretty dated, was so different from anything in 1989's ready-to-burst bubble of rock. Faith No More also don't get nearly enough credit for bringing rap into rock, even though that was just one small layer of their sound. It spawned legions of horrific copycats, but that ain't their problem.

I'd pay top dollar to see this band live again. Awesome fucking news.
Posted by Michael Marotta at 9:52 AM