RIP: Lux Interior of the Cramps 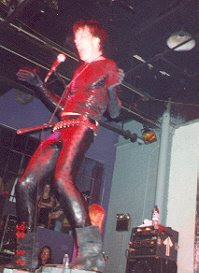 Update: Statement from the band's publicist down below, and now Pitchfork has chimed in on the Life of Lux.
***
Word from the Daily Swarm is that the Cramps' Lux Interior died this morning. No other information is out there, even on the Cramps' site or Lux' wiki, so who knows if it's true or not. But he was 60 so it's entirely possible.

I wasn't the biggest Cramps fan in the world, but I appreciated their place in history and when I was about 13 or so in the early '90s, I remember buying a bootleg Cramps cassette off some street vendor punk in New York City's Union Square. It was a hollowed out live recording from some venue called Clutch Cargos, and it dominated my walkman for weeks after I got it. It represented punk in ways that the Op Ivys of the world could not (I was 13. Evs). Everytime I hear of the Cramps, I think of taking the LIRR into the city, standing outside Coney Island High on St. Marks and being enamored with the dirty ass people around me. And I think of that tape. RIP Lux, you were a legendary performer.

Lux Interior, lead singer of The Cramps, passed away this morning due to an existing heart condition at Glendale Memorial Hospital in Glendale, California at 4:30 AM PST today. Lux has been an inspiration and influence to millions of artists and fans around the world. He and wife Poison Ivy’s contributions with The Cramps have had an immeasurable impact on modern music.

The Cramps emerged from the original New York punk scene of CBGB and Max’s Kansas City, with a singular sound and iconography. Their distinct take on rockabilly and surf along with their midnight movie imagery reminded us all just how exciting, dangerous, vital and sexy rock and roll should be and has spawned entire subcultures. Lux was a fearless frontman who transformed every stage he stepped on into a place of passion, abandon, and true freedom. He is a rare icon who will be missed dearly.

The family requests that you respect their privacy during this difficult time.
Posted by Michael Marotta at 2:24 PM