With July's 30th anniversary of the legendary Disco Demolition night in Chicago, it's only fitting that the party genre is back in full force from coast to coast through sub-revivals in indie, electro and pop music. Boston jumps into the disco mix tomorrow night at Middlesex with Disco-nnection, a new monthly night from Brendan Wesley of A-Kult/GoodLife. 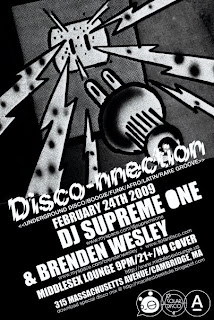 This should be a better party than "Color" (Oof, remember that?) Here's word from Wesley:

This Tuesday, Feb 24th. Disco-nnection w/ Myself & DJ Supreme One (You may know him as Serge)-Free-. You all know me and that I am a disco junkie and my style is strongly influenced by all those grimy, lost underground tracks that time forgot... We will be playing mostly organic sounding underground disco boogie/funk and some classics as well.

Come on Boston, I know there are some real disco/house heads that know how important this night is for the scene. It's not all about Electro, Hip-Hop and minimal techno is it? We get deeper than that don't we? Let's make New York proud ;)
Posted by Michael Marotta at 9:51 AM