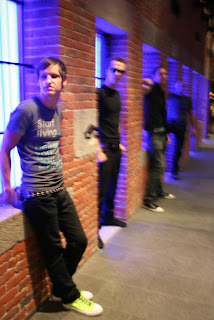 The fine lads in Televandals are up for a spot at SXSW, but only with the people's vote. There's a few dozen bands in the running for this prize, courtesy of something called Platform 1 or whatever, and most bands listed look like bigger chumps than Hosea from Top Chef (WTF City). So let's vote Televandals in, let's also get them that Best Rock Band nod in the Phoenix poll. We'll then all party at their April 17 pill show like nobody's bidness.

We are currently in competition to play the prestigious South By Southwest Festival in Austin, Texas this March. Again, we need your vote so we can be selected to play as part of the Festival's Emerging Artist Showcase.
Posted by Michael Marotta at 8:48 AM