Dave Matthews at Fenway this spring?

I’m more interested in this because of the Fenway Park aspect, but Dave Matthews released his 8,000-date North American tour itinerary for this summer, which includes two TBA dates in Boston May 29 and 30. 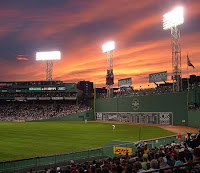 A quick look at the Red Sox schedule shows they’re in Minnesota and Toronto that week, opening up the field for this summer’s yearly Fenway mega-concert. And the ballfield’s wiki page has even confirmed it. Can you say "citation needed"?

With Matthews tapping Eli “Paperboy” Reed & the True Loves to open at least one date on tour – the Izod Center in New Jersey’s Meadowlands – we can only hope he brings the Brookline native up here for a sweet Boston homecoming. Wiki said the candidates to open the Fenway shows are Robert Randolph & the Family Band, Jason Mraz and Willie Nelson.

Previous Fenway Park summer concerts have featured the Rolling Stones, Jimmy Buffett, the Police, Neil Diamond and Matthews in 2006. U2 was originally rumored for this summer’s Fenway slate, but talks apparently never got serious.
Posted by Michael Marotta at 8:11 AM