Talking ragtime and posting dope videos down at Hotline HQ: 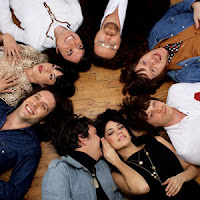 We get tons of music notices and releases over here at the ultra-posh and wicked-exclusive Hotline HQ, and sadly most of it arrives in a package sent straight from Meh City. But every now and again something rules and catches our attention and hits a certain note with us and we get all giggly and play it too loud in the newsroom and annoy the editors’ wing.

But then we get stuff that puts us in a trance, and we quietly play it or listen to it again and again and decide to not share with anyone until we post it, as if we were transformed into some hypnotized cult follower doing the good work of a high calling we don’t fully comprehend. We merely know we must spread the word. This new Phenomenal Handclap Band video for “Baby” applies here.

We’ve watched it several times already and it just works for a cold, quiet morning like this. Plus, the video is creepy as all hell. Official deets from our friends at Big Hassle Media after the visual jump.

NYC's own The Phenomenal Handclap Band recently debuted their video for "Baby" on Stereogum. Likened to a Dario Argento film, this trippy, color-saturated, and beautifully dark video is directed by Steven Agnew, formerly of The Futureheads' "Walking Backwards" video fame.

Band member Sean Marquand said about the filming of the video, "we went upstate to our friend Paddy's house, which was incredible, but the surreal serial killer aspect colored everyone's mood. Even when we weren't filming, there seemed to be someone sneaking up on us in the forest. The video reflects some of the highs and lows of our weekend. There's kinship and celebration there but there's also an underlying paranoia attached to being at such a remote location."