Needless to say, I'm pretty excited for this. Emergency Music & the pill go back a long way... 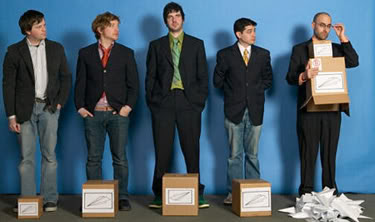 friday february 19:
Emergency Music
so long to the slumber, it's a reunion
Emergency Music is back. Resurrected from the underground jangle-pop ashes that took so many before their time, one of the pill’s original gang of indie playboys return to our stage this Friday night for a one-off club gig.

Tied into their in-store appearance the following afternoon at the freshly-minted Urban Outfitters just a harmony’s toss from Great Scott, it’s officially Emergency Music weekend down in Allston Dance City.

The love affair between the pill and Emergency Music goes back more than a decade, and along the way together we’ve raised many a glass: fast friends during the Upstairs Lounge Era; two sterling tracks supplied for the pill’s 2004 Man With A Gun Records compilation “Tomorrow Never Happened;” two for-the-ages Halloween shows (Blur ’04, Velvet Underground ’05); and a legendary performance at the very first pill at Great Scott five years ago earlier this month, when on an hour’s notice Emergency Music rolled up Comm Ave like a modern indie mob and christened our stage, filling in for a band that suddenly went MIA.

Countless gigs, memories and melodies later, we’re psyched as fuck to welcome our boys home. Emergency Music, live at the pill this Friday, Feb. 19 – this is a wilderness, indeed. Our wilderness.

Before and after the band, DJ Ken & Michael V spin the best in Britpop, Modern Indie & Beyond. Look sharp. 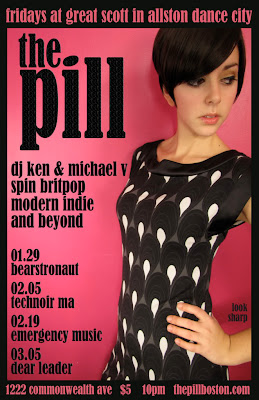 Posted by Michael Marotta at 1:54 PM